Premiere of ‘The Gathering’ – Yn Chruinnaght 2015 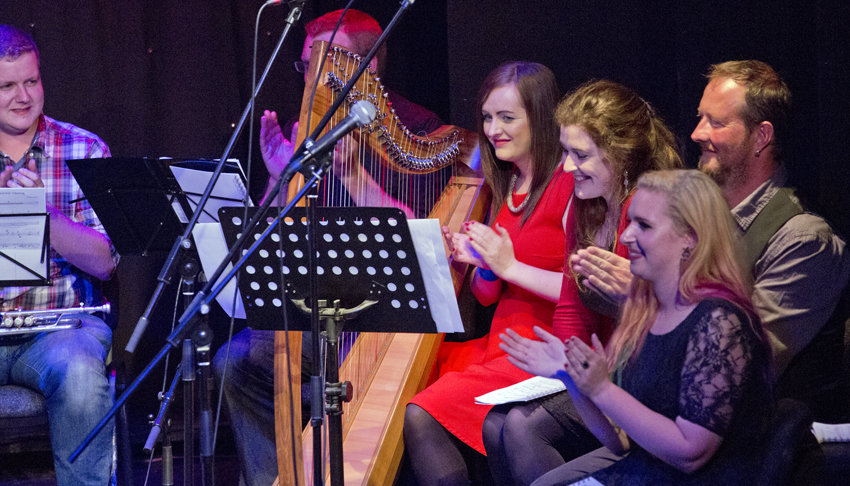 Premiere of ‘The Gathering’ – Yn Chruinnaght 2015

I’m not one to get nervous on stage, but this July I found myself slightly aflutter… I wasn’t performing, and nor was I about to, but I had been asked by Sarah from the wonderful band Flook to light candles on a cake and bring it on stage to birthday boy Ed Boyd during their concert in Yn Chruinnaght festival 2015. I cheerfully said yes, but then thought: what if I lit the candles too soon and they all melted?! What if I set off the smoke alarm? What if I unwittingly set myself – or worse, someone else! – on fire by tripping over a lead on stage?! Eek! Thankfully none of the above happened, and I was able to do my duty as a good festival committee member!

As well as performing, I do love to be involved in the organisation of events, and that was what really drew me to becoming involved in the committee of Yn Chruinnaght – an annual interCeltic festival that happens each July on the Isle of Man and brings over top artists from across the Celtic world. Though I’m usually behind the scenes in this festival, this year I was also on stage for the premiere of ‘The Gathering’ – a commissioned piece by Manx multi-instrumentalist David Kilgallon, which was written especially for the Festival Interceltique de Lorient 2015 and given its first outing during Yn Chruinnaght. Eleven musicians from the Isle of Man, Scotland, Cornwall and Brittany came together to perform the composition that features Celtic languages and snippets of traditional melodies and songs woven into six enthralling movements.

I had a great time performing alongside two other great singers: Lors Landat from Brittany and Lauren Chandler from Cornwall, as well as many other co-musicians from the traditional scene: Manx fiddler Tomas Callister (Barrule, Mec Lir) and Scottish harpist Rachel Hair being two of those. The suite of pieces also featured dance from Lowenna Hosken (Cornwall) together with Gráinne Joughin and Ali Carroon (Isle of Man). We performed ‘The Gathering’ in the Grand Theatre at the Festival Interceltique de Lorient, and you can see a snippet of one the instrumental/dance tracks at 2 mins 18 secs in the video below.