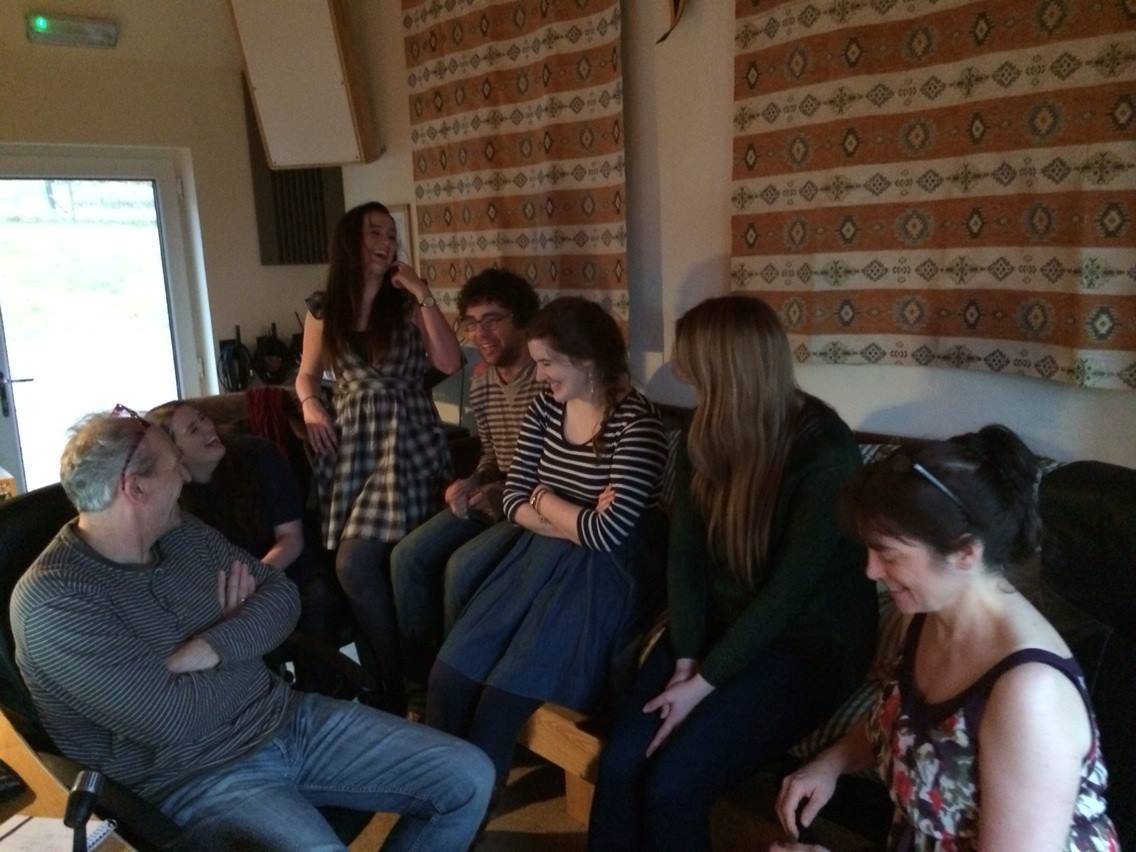 For me, one of the best things that happened in 2014 (asides from releasing my debut album) was the creation of a new InterGaelic vocal project called Aon Teanga – Un Çhengey. I had been aware that, while there had been many moves to re-establish Scottish-Irish links in recent times, there had NEVER before been a project that united the three Gaelic traditions. I had to ask myself why this was, given that the Manx Gaelic language is so closely related to Scottish Gàidhlig and Irish, and that there are strong links between our traditional musics.

The Gaelic language was at one point a single tongue, uniting folk right across the Straits of Moyle (or Sruth na Maoile as it’s known in both Gàidhlig and Irish) and the Irish sea. I felt that the Gaelic ‘trinity’ should be reunited and, with Manx music and language in a vibrant, healthy and positive position, what could be better than the three song traditions finding their single voice again?

During late 2013, I brought the idea to two Gaelic singers whom I really respect: Mary Ann Kennedy (Scotland) and Eoghan Ó Ceannabháin (Ireland). Both of them were completely taken by the idea and the rest, as they say, is history! We decided that we wanted to delve into our traditional roots and to share these with each other, while working to assert the place of the Gaelic languages and culture in a contemporary world. The plan quickly became to create an album and to tour it, starting off with our homelands of Ireland, Scotland and the Isle of Man.

We are very grateful for support from PRSF’s Beyond Borders fund and the Isle of Man Arts Council, without whom the recording of this album and tour would not have been possible.

So! Background blurb aside (and if you’re still reading… I hope so!) I wanted to give a bit of background into the writing and recording process of the album, which will come out in summer 2015 with a couple of tours in the summer months – details will be posted on my site anon!

The project got going in May 2014, when the three of us met together in the west coast of Scotland to share and sing songs together, and to swap tales and traditions from our own nations – the latter being every bit as important as the music! We decided that the sea would be the overarching concept for the music that we would create together, as it was, of course the original ‘highway’ between the three nations – linking one language and culture.

We had a couple of other sessions in Scotland and Ireland, spending time writing new music together, arranging sets and singing in our own and each other’s tongues before going in at the deep and recording the album this winter.

It was cold, oh-so-cold, when Eoghan and I set up to Watercolour Music in the west coast of Scotland to record the album – see the snow in this picture of Glencoe, taken from the coach! Still, winter is – as long as you don’t get hit by flu-ey, cold-y sickness – is really great for spending time writing and recording music as it tends to be a quiet time of year for gigs and festivals.

The night before we began recording, Nick, our sound engineer, presented us with a array of different coloured plasticine strips, and instructed us to make miniature versions of ourselves. These little guys will appear around about in the odd bit of promo stuff in the future (as long as we don’t squash them accidentally!), so keep your eyes peeled! The character above is supposed to be me, incidentally… make of that what you will!

While a lot of our tracks are reworkings of traditional songs, we have written new material for the album too: one of these was a song composed by Mary Ann to a beautiful Gàidhlig poem, newly-written for us. While Eoghan and Mary Ann sang together, I played the piano. Mary Ann and Eoghan are multi-instrumentalists too and the album features a few different timbres, including a harmonium.

A couple of days into the session we took a brief break to go to the televised Scottish Trad’ Music Awards, which Mary Ann was presenting for BBC/MG Alba. I went there as a guest of PRS for Music, and Eoghan borrowed and wore his very first kilt. Well… when in Scotland! He looked excellent, but sadly I didn’t manage to get photographic evidence as he was sitting at a table with the Inverness Gaelic Choir (who no doubt approved of his attire)! I was pleased to be able to see a lot of friends receive much-deserved awards, and hear some great music – my particular favourites being Fiddlers’ Bid (pictured above) and Shooglenifty.

Mary Ann, Eoghan and I were joined by some great musicians during our stint of recording – these being Clare fiddler Ultan O’ Brien (Skipper’s Alley; Juhn Echo), Scottish guitarist Finlay Wells and Gordon Maclean from Comar – our project partner on the Hebridean Isle of Mull – on double bass. My phone was off most of the time so as not to interfere with the sound equipment, so I didn’t manage to take many photographs, sadly!

On our final day of recording we were joined by the wonderful Glasgow-based Irish musicians the Friel sisters (here we all are above caught laughing at something!) plus one of my favourite Gaelic singers Griogair Labhruidh (the camera man in this instance!), to record a great trad. waulking song. After a quick bowl of soup, hurried embraces and exclamations of, “have I remembered everything?!” it was straight to the Friel-mobile to get on the ferry and back to Glasgow so that I could catch my flight back to the Isle of Man! Roadtrips with those lassies are definitely the best: bucketloads of trad music to listen to in the car, and lilting partners like no others!

Mary Ann, Eoghan and I will be mixing the album in February and it will be coming out in spring/summer 2015. Keep your eyes peeled here for updates; I will be writing more blog posts soon!