Last week, Mary Ann, Eoghan, Ultan and I took to the Scottish roads, accompanied by double bassist, sound-engineer, roadie, organiser-extraordinaire and all round super-fella Gordon Maclean, to do a week-long tour with Aon Teanga:Un Çhengey. 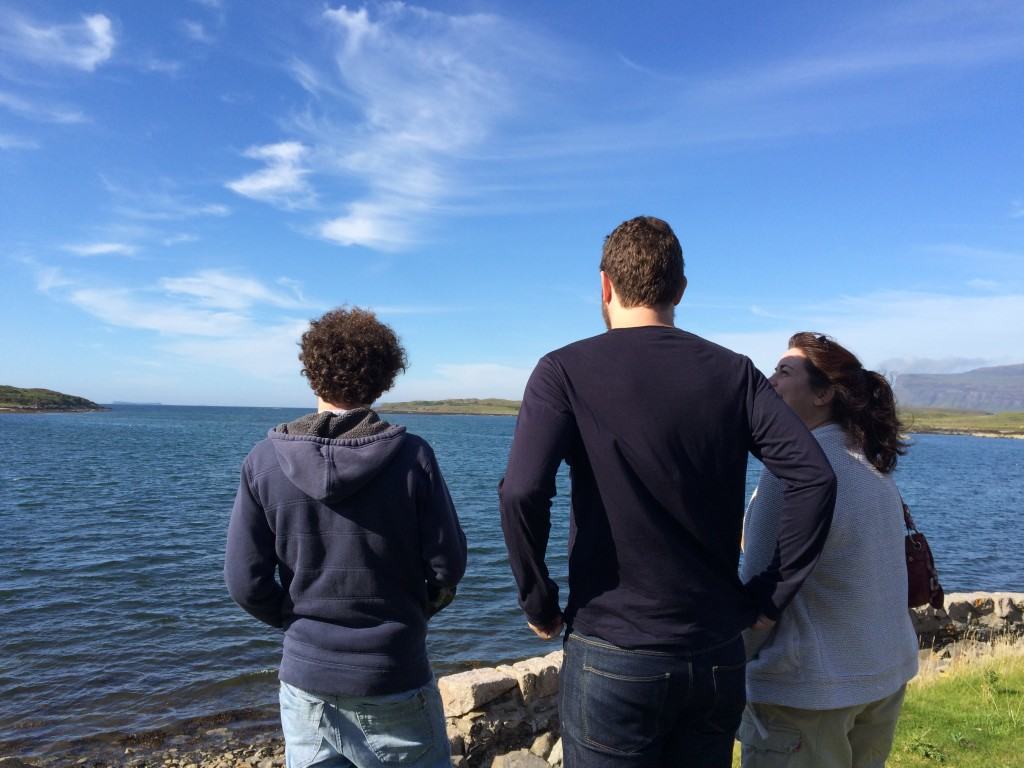 We started off in Bunessan in the Isle of Mull and, though Eoghan and I were super-tired after having just arrived on the West Coast after a 30 hour coach-ferry-coach-train-coach(!) journey from Lorient, it was just lovely to arrive in such a pretty, calm village with the sun beaming down and sheep grazing gently all around the sides of the roads, cottages and houses. We performed in Bunessan Village Hall to a mixed audience of locals and tourists – many of whom came every year to stay, which just goes to show (if you’ve never been to the Hebrides) that you can really get hooked on these Islands! We were armed with brand new preview copies of our album – the first time that they had been available in Scotland – and an ingenious way of mic-ing up one of more ‘curious’ instruments, and had a really great first gig to the tour! 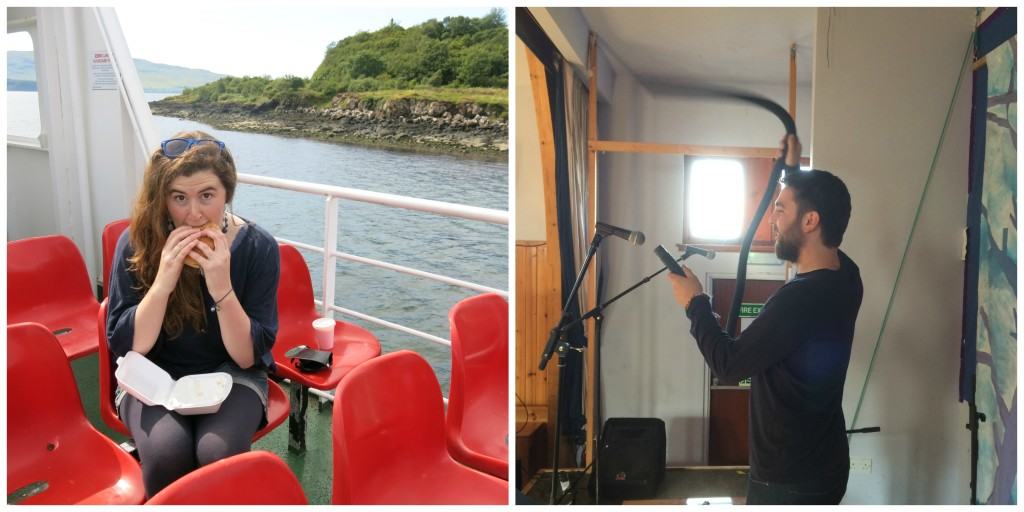 Venison burger aboard the Lochaline – Fishnish ferry. Had to be done! And soundchecking the Súiteoir!

From Mull, we went onto Iona and were very lucky to be granted special permission to take Gordon’s van with all the soundgear onboard the teeny, tiny Cal Mac ferry to the Island! It was raining pretty torrentially by then, so we all clambered into the front seats to get some shelter for the short crossing over to the small Island. We spent a good portion of the day rehearsing and soundchecking before our concert, but did find time to visit Iona Craft Shop (a dangerous place to go if you’re a fan of wool in general… I had to be dragged out by Eoghan and Mary Ann!) and beautiful Iona Abbey. The ancient Abbey is named after St. Columba, who brought Christianity to the Island, and so it felt fitting for me to sing the Manx song ‘Padjer Columb Keeilley’ (St. Columba’s Prayer) in there. The three of us also sang another song from our album – Creggyn Scarleode – and made a little video of it on my phone, which you can watch here. <—click!

Iona still looks beautiful, even when it’s overcast and dull! ~ Iona Hall, before opening the doors! ~ Inside Iona Abbey 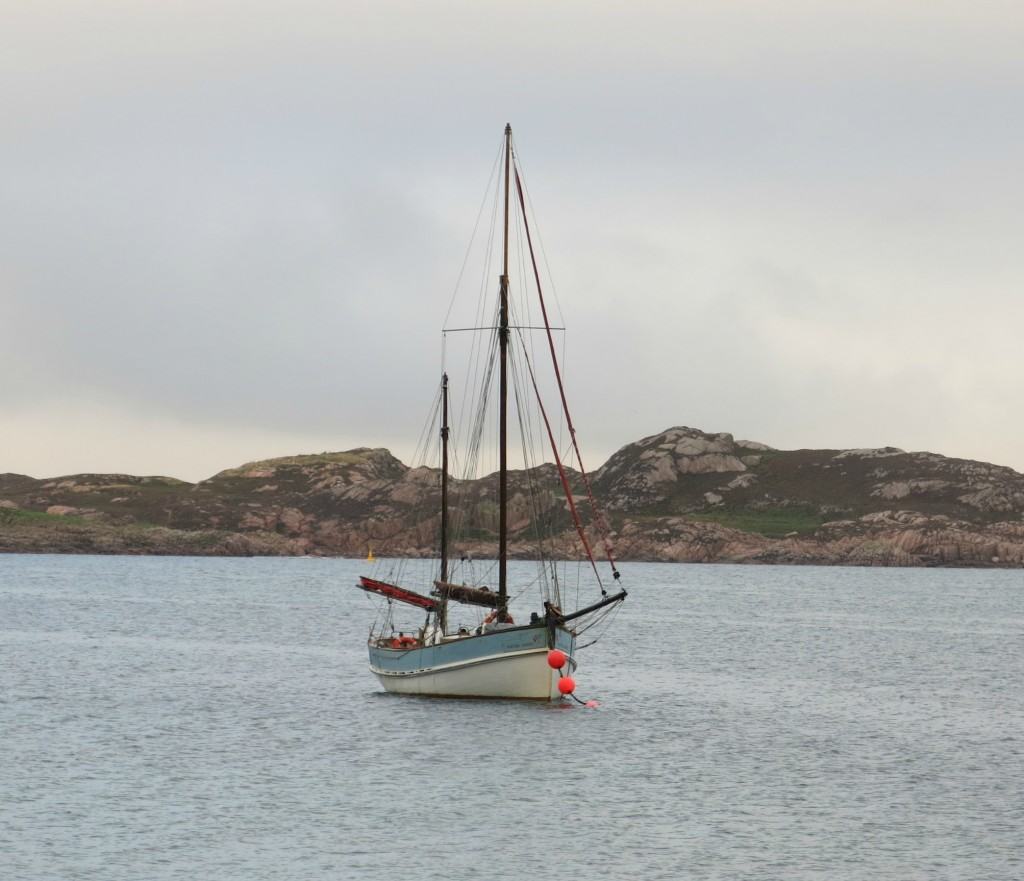 After another enjoyable concert, and an amazing curry at the house of two very kind Islanders (thanks Katie and Mike!), we were taxi’d home across the water, but not in any old vessel…! As the Caledonian-MacBrayne ferry services had finished for the day, we got to travel back to Mull in the Berthe Marie (pictured, left) – an 82 year old Danish sailing ship who, in her time, was used for fishing in the Baltic. We sang the Gàidhlig voyage song Eilidh Chuain as we crossed… it seemed only appropriate as she also went to the Baltic via the Isle of Man and Ireland. We wrapped up warm on deck as we crossed the sound, watching the tiny, warm lights of Iona bobbing up and down and ever into the distance. A fine night!

The next night, we performed in Strachur – a lovely place on the mainland in Argyllshire – and were honoured to have Mary Ann’s Mammie, Kenna Campbell, in the audience, as well as her MA’s auntie. Again, such a lovely crowd and yet more people who had no idea that the Isle of Man has its own language and traditional music and were excited to discover that it does! This is one of the things I love about singing: spreading the word about Manx language and music is really important and I feel very honoured that I am able to help do that, in a small way. 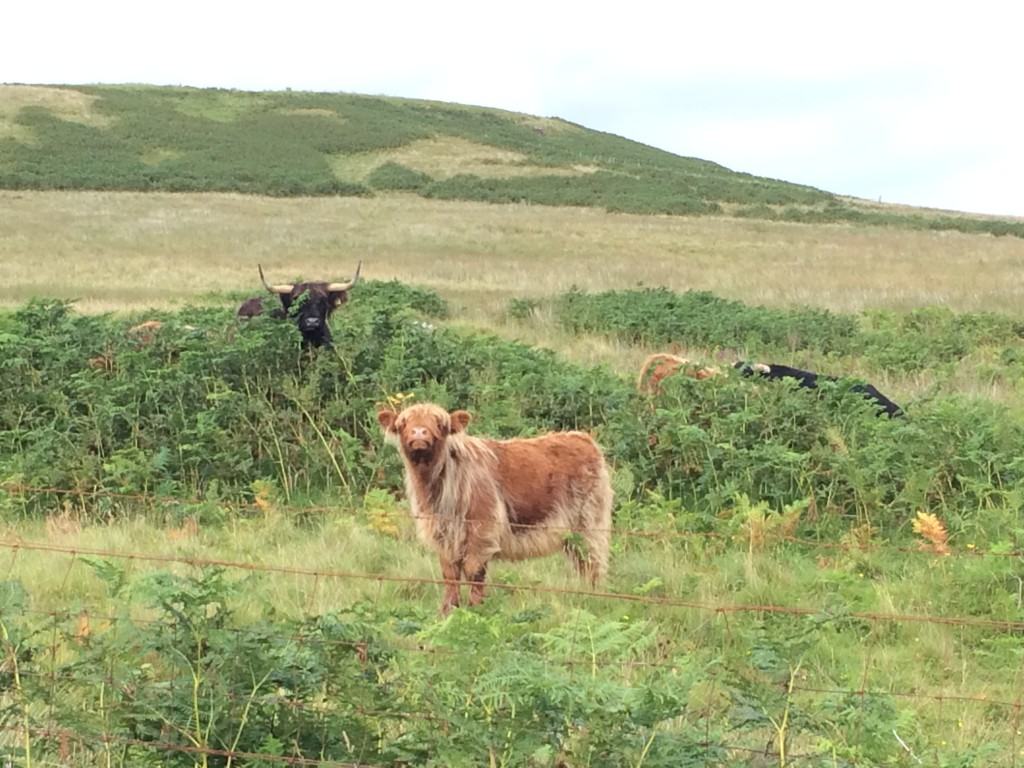 On the Friday night we bombed up the road again to Mull – Tobermory this time – and saw these gorgeous Higland coos on the way! Awwww! We had a great gig in An Tobar – a place that we hold dear in our hearts as it was where we gave our first ‘proper’ gig and where the organisation Comar (key partners in our project) are based. As ever, we enjoyed chatting to the audience after our gig – one of whom was keen to share Yn Chruinnaght memories with me (an annual interCeltic festival that has been running on the Isle of Man for nearly forty years) and another couple who chatted to Eoghan about their hometown Washingtown D.C, which is where Eoghan’s girlfriend lives!

Our second to last gig happened in the pictureque village of Tayvallich, again on the mainland. After some seriously delicious (and yogi-like – check out the photo below!) langoustines in the pub down the road, we gave our gig at Tayvallich Hall which had a proper Highland feel to it (check out those Stags heads at the back!) and an audience who were definitely up for some fun! A few members of Atomic Piseag (Gàidhlig ladies’ choir based in Argyll… I’ll let you Google if you don’t get the joke in the name!) were there, and bizarrely enough one of Björk’s former managers, who was a lovely lady from the North-East!

Finally, after a great week together, we finished our tour giving a house-concert in the very place that everything began: Watercolour Music Studio. We had recorded our album there eight months previously, so it was special to play to an audience there, using the same harmonium and same baby grand piano, with the view of Ben Nevis out of the large windows from the stage. Ardgour has been such a base for me during the last year and a half for me that it feels like a second home. We were joined by Finley Wells for this gig (and the gig in Tobemory) so had the full original line-up from the album. At the close of the gig Eoghan shot off to catch a plane to America, and I found myself in a hammock, happy and with a head full of songs! Here’s to the next tour! In the meantime, we’re looking forward to our official album launch on the Isle of Man on Friday 18th September, and a gig in Edinburgh on Friday 27th November (details TBA). Stay tuned for more details!