Having a ball in Brittany! Performing at the Festival Interceltique de Lorient 2015 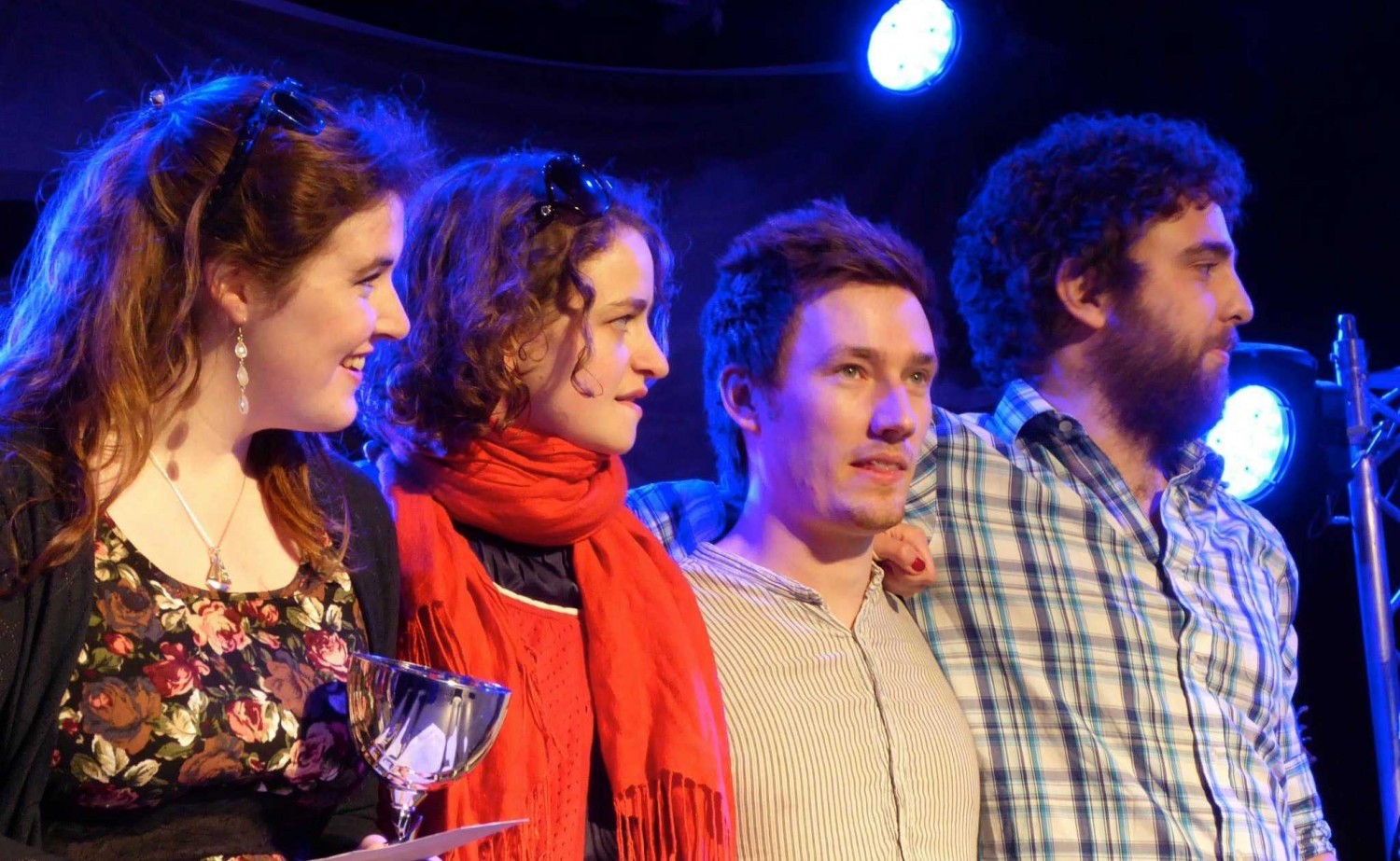 Having a ball in Brittany! Performing at the Festival Interceltique de Lorient 2015

Attempting to sum up the Festival Interceltique de Lorient in one blog post is not an easy task (as anyone who has been to the festival will know!); over 800,000 festival-goers hit the Breton city of Lorient during the ten day musical ‘marathon’, with over 3,500 artists performing day, and night. I will just make myself content with scratching the surface of this fantastic festival, giving a short account of what happened in FIL 2015 from the perspective of the Manx (or one Manxie, at least!).

This year was particularly busy for Manx performers, as the festival honoured the Isle of Man and Cornwall as the featured Celtic nations… for the first time in the festival’s forty-five years! Now I think it’s safe to say that Lorient won’t forget us in a hurry!

Some of the highlights for the 100+ strong delegation from the Isle of Man that hit the Breton shores would surely be the Manx power-trio Barrule doing a brilliant job and winning the Trophée Loïc Raison, with my own band winning second prize (another first for the Isle of Man to have two bands in the top positions!); the Manx trad-pop quartet Mec Lir creating an absolute sensation both on stage and post-festival (see the viral video with over 1 million views here); the joint art exhibition bringing in something like three-times the amount of normal visitors during the festival; and scores of wonderful performances and fantastic representation across the board from Manx performers and visual artists. I am always proud and passionate about being Manx, but FIL 2015 really was something else.

Knowing from previous experience how full-on the festival is, I was careful to take it easy and try and get enough sleep (though this wasn’t always achievable with pipebands and bombards (a traditional Breton instrument, like a particularly shrill oboe!) playing outside your dorm window anywhere between midnight and 6am most nights!). Over the ten days I performed eleven gigs with my own band, Aon Teanga:Un Çhengey, Manx Gaelic choir Caarjyn Cooidjagh, and an ensemble of 11 musicians performing a newly composed suite of pieces called ‘The Gathering’, by David Kilgallon. Click here <– to watch a short video where I chatted to MTTV presenter Paul Moulton about my involvement in the festival.

After a delayed start to getting to the festival, during which time the Manx explored every nook and cranny of the departure lounge at Ronaldsway (Isle of Man), we hit the ground running for the ‘Soirée d’ouverture Cornouailles et l’Île de Man’ in the Grand Theatre on the Saturday night – an event that involved a number of groups from the Isle of Man and Cornwall – including my own group – and ended up with ‘The Gathering’ to finish the concert. 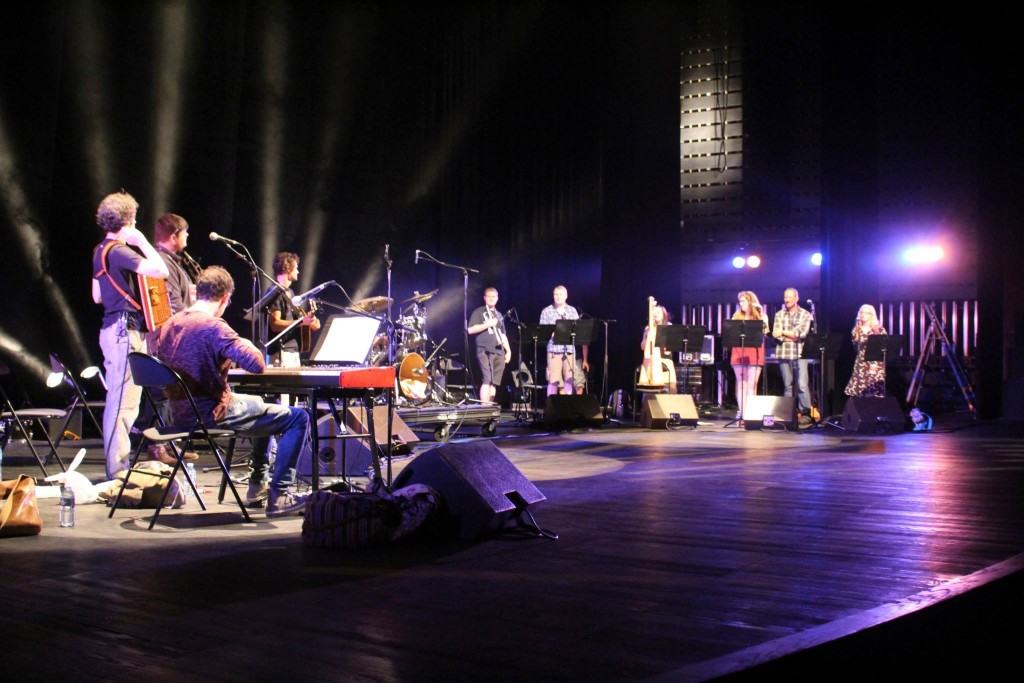 Soundchecking at the Grand Theatre for The Gathering

The night was particularly memorable as I met a lovely lady, Ina, who had driven all the way to Lorient from south Germany after she had finished work to make sure that she would catch my band playing at the concert, and I was also the delighted recipient of some red-velvet whoopie pies with white chocolate three legs of Man atop, during the interval of the concert from Gaëlle: definitely the best home-baker in Lorient! What a good way to start the festival!

During the festival my band and I performed at the Manx-Cornish pavilion – a grand space that could hold several hundred standing spectators and had a bar and café with lots of delicious Cornish and Manx specialities – and on the last Friday played in a heat for the prestigious Trophée Loïc Raison. We were delighted to get into the final the next night and then even more delighted to come a VERY close second to the Manx trio Barrule – jeant dy mie lads! 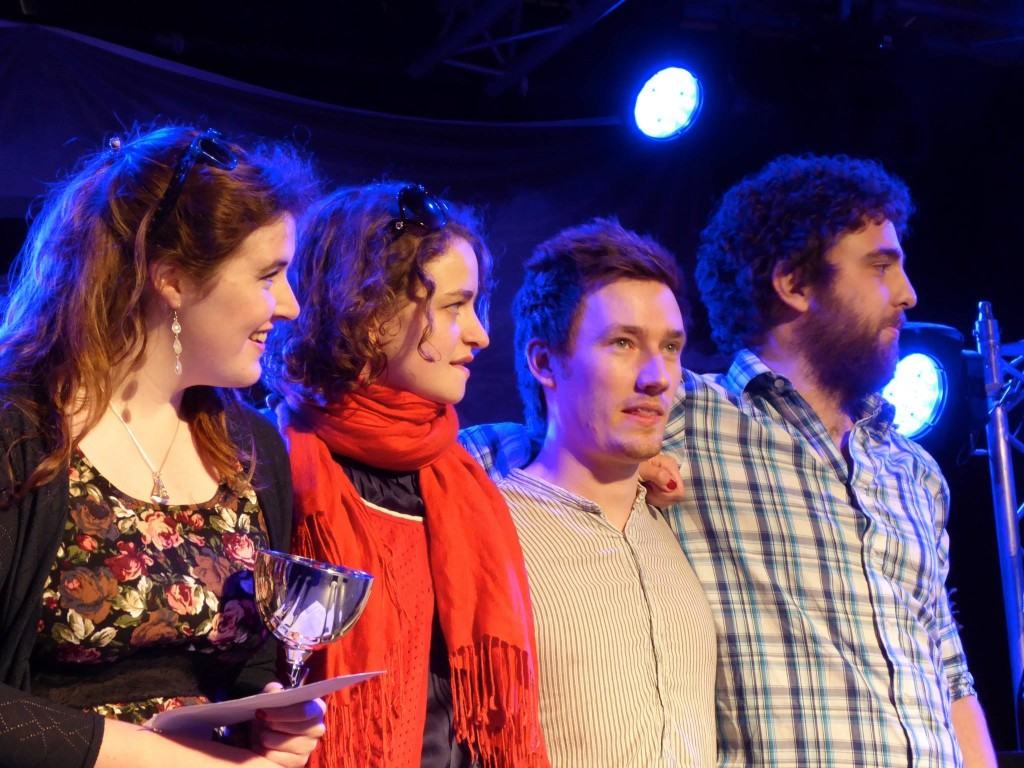 In the first half of the festival, Aon Teanga:Un Çhengey gave a concert in the Grand Theatre, where we sold preview copies of our new album – the full version of which is being released in a launch concert on the Isle of Man on 18th September – and I also sang with Manx Gaelic choir Caarjyn Cooidjagh in the Stade du Moustoir (a.k.a the football stadium in Lorient) for the Nuits Interceltiques, a concert that attracts around 10,000 spectactors each night. 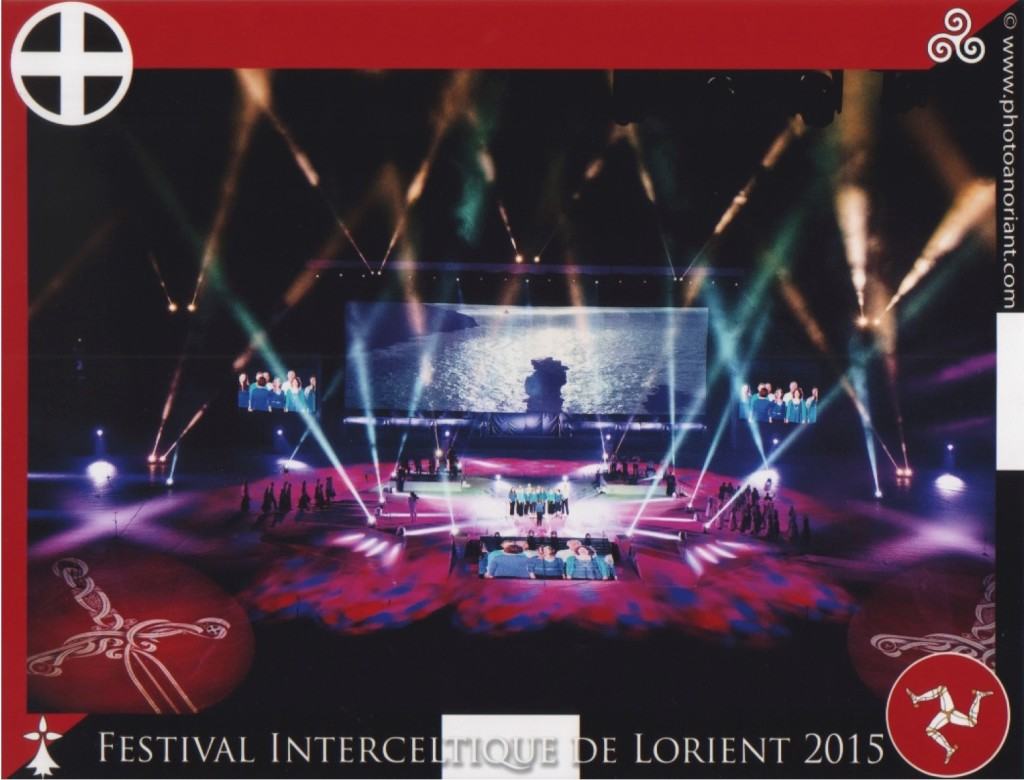 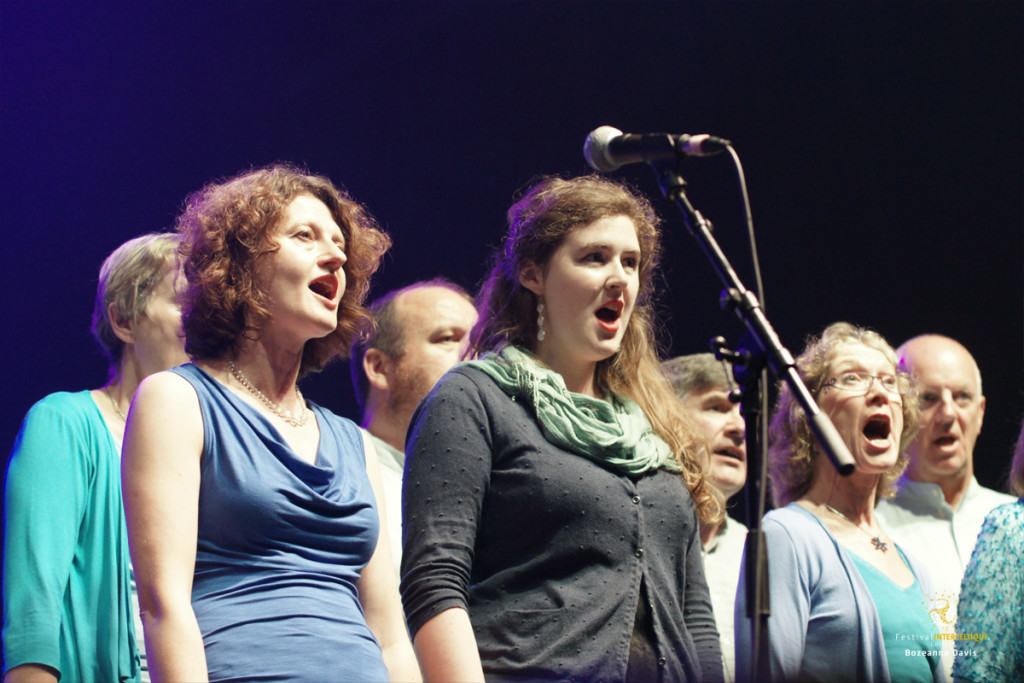 Asides from winning second prize in the competition, my highlight of the festival was probably performing ‘Tree Eeasteyryn Boghtey’ (Three Poor Fishermen) with Mec Lir in a Grand spectacle on Monday 10th August. The song itself has a very haunting melody, and though it does work well unaccompanied, there’s something very visceral about throwing yourself into a song with a backdrop of eerie and effective lighting and a wash of instrumental sounds that ebb and flow against what you’re singing (hello EBow!). Click here for a short video that my bandmate David took on his phone from the audience. 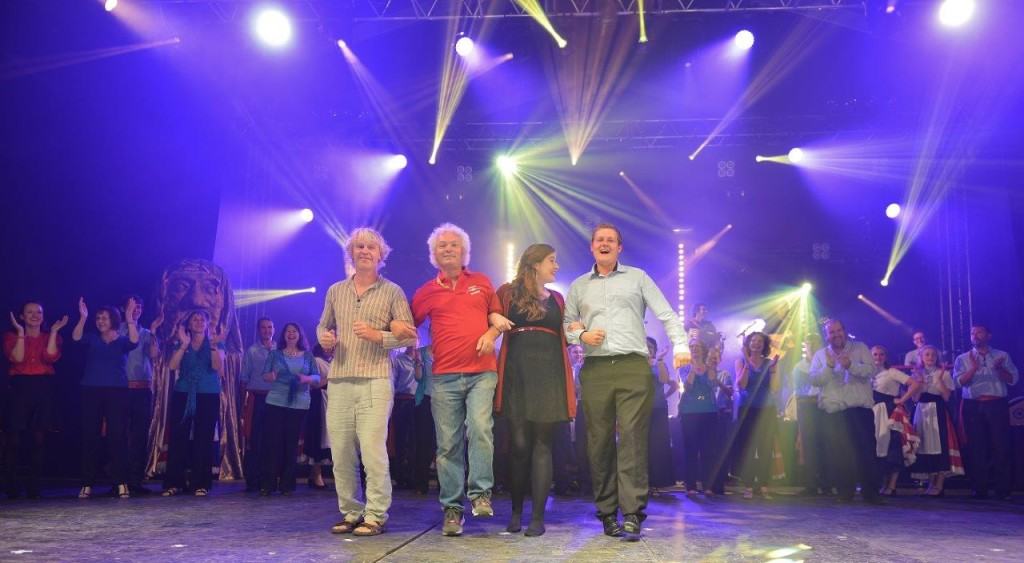 Curtain call at the end of the spectacle!

Other highlights outside of performing myself would have been seeing Shooglenifty perform – I grew up listening to them from childhood and just LOVE them! – and meeting friends old and new, including a piper pal of mine from Mexico who I only ever get to see at the festival!

So, at the end of a long but happy festival, my fellow singer and musician Eoghan Ó Ceannabháin and I hopped aboard a coach bound for Glasgow to begin a very long journey up to Mull for our next set of gigs… with Aon Teanga:Un Çhengey! You can read about these adventures here.